As promised last time, I went hiking the very next day and took some pictures of the hanukkiah from the top of electric mountain. The sun was setting so I got some pretty awesome pictures. The last day of Hanukkah was Christmas Eve so it’s been over for awhile now, however the stores are still selling the last of their suvganiot. 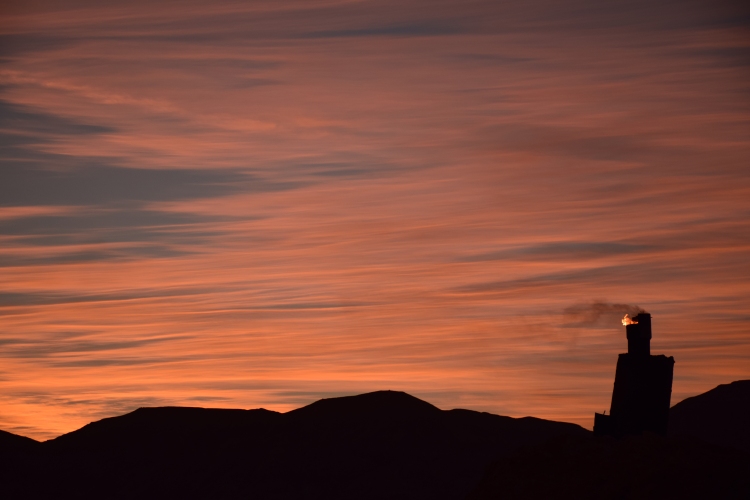 This picture was taken awhile ago, I just found it now so I figured I’d show you the nice outside dining area for warm mornings and afternoons. This particular morning we were all eating breakfast before heading down to Eilat to run errands on the eight o’clock bus.

While hiking I went back to fossil canyon with a few friends and they found this totally awesome sand dollar fossil. They didn’t know what it was called and just though it was a very cool shell. I thought it was the coolest thing ever, having a small collection of sand dollars at my house. Who’d have thought? I go thousands of miles away from the West Coast and still manage to find some familiar shells. 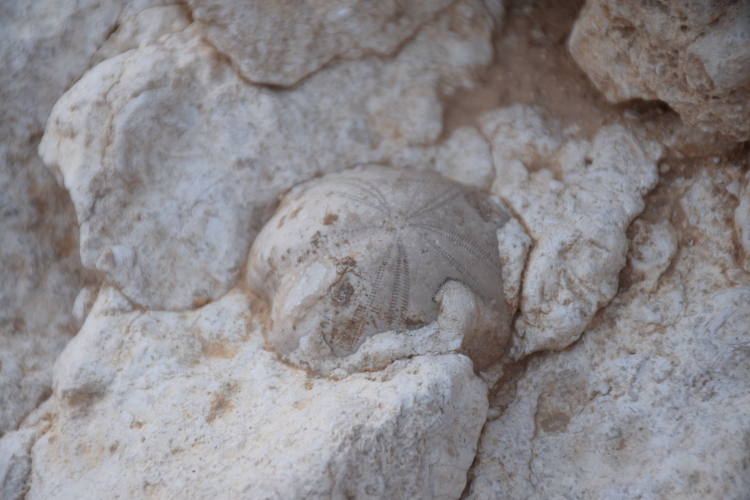 This was just a super cool photo from the hike. We’d gone up fossil canyon and were hanging out on top of some of the large rocks before heading back. Although it looks high we were only about twenty feet above the ground. 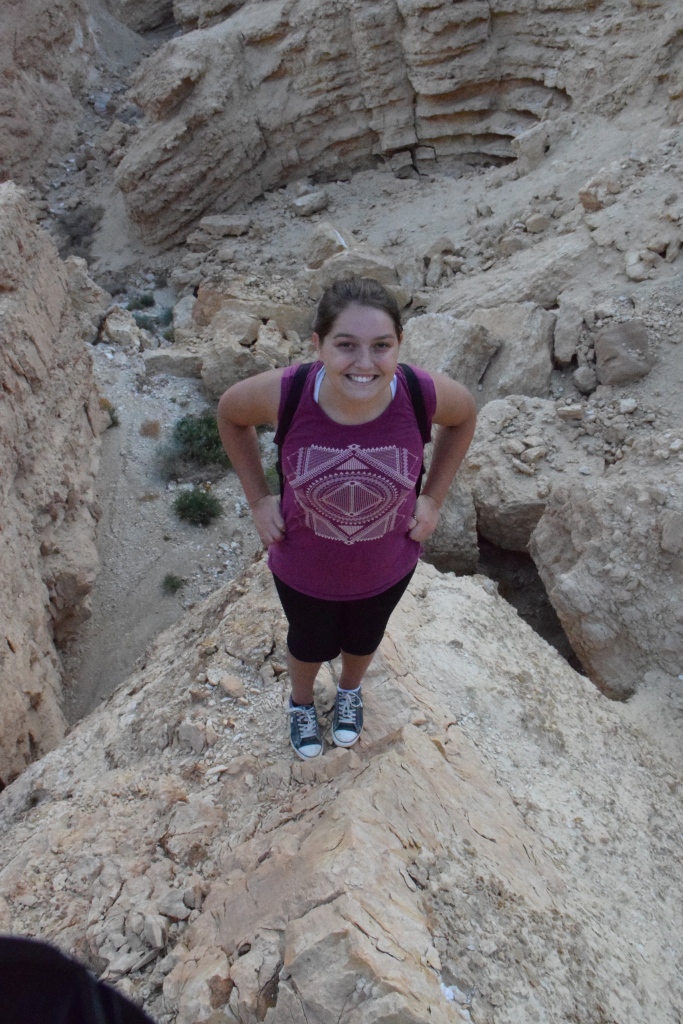 So this is Tom, affectionately referred to as Thomas, Tom or Tommy. He’s one of the kibbutz cats who has adopted the students. His partner in crime is a large brown tabby named Falafel who also hangs out with me but is somewhat more skittish. Tom and I have become best friends to the point where if I sit down to work he sits in my lap and half the time on my keyboard. This was sort of a compromise.

I was lucky enough to join one of our research teams in the West Bank to examine some grey water systems that they have installed and are working with. They have been testing the water quality and improving the systems so that they can implemented more widely throughout the West Bank. I was there to take some high quality photos of the system for use in papers and to record what they water looks like on each side of the tank. In addition to the more scientific photos, I took whatever other awesome photos I felt like and got this adorable photo of one of the kids near the grey water system sign. 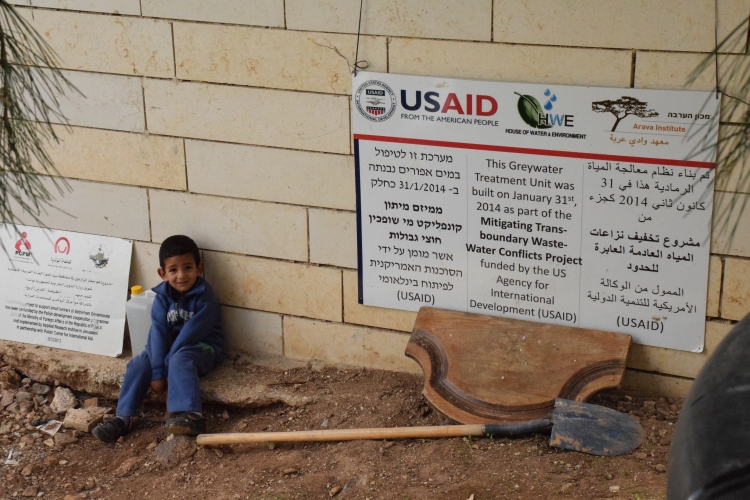 After returning form the West Bank my friend and I arrived just in time for a Winter Solstice celebration which encompassed Christmas and Hanukkah as well. Following this, we had a nice closing activity to begin saying our goodbyes to each other which was a little sad. Using the PAs as mail persons, we wrote notes to each other of all the things we felt like saying. They could have been as simple as “Your face” or a nice long note along the lines of “Oh man you’ve changed my semester, I’m so glad we met, you’re the greatest.” I tended to write a little of both. 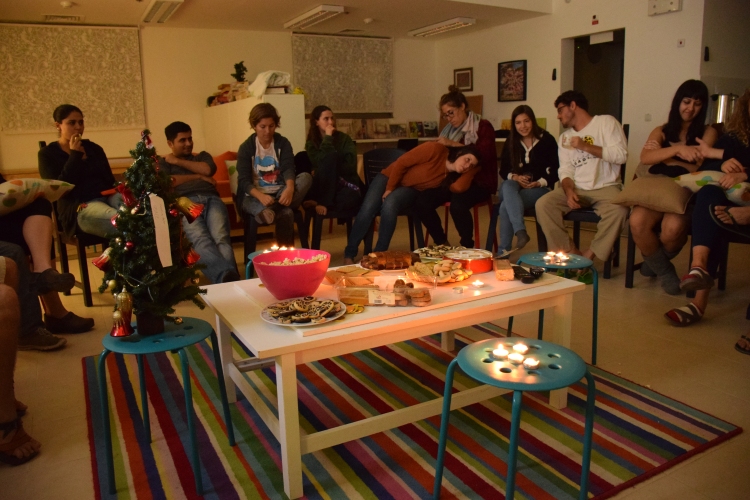 So the kibbutz has a little pub, and in that pub is a small dance floor, and on that dance floor are kids from the kibbutz, students and volunteers (and whoever else is around). It’s open twice a week for a few hours in the evening and I go every once in awhile to hang out with friends and dance for awhile. Lately one of the students has gotten to DJ, so he’s been playing really good music which makes it even more fun. Every once in awhile the pub hosts larger events like the singer I talked about in one of my last blogs, or going away parties (which I’m sure I’ll talk about in my next blog when I attend my own going away party).

Occasionally us students have some fun of our own, this was a super fun improv night. In this game two students were puppets and the others were puppeteers. The puppets could say whatever they wanted but only the puppeteers could move their limbs. Hilarity ensued. I don’t remember exactly what we were saying in this scene but I think I was berating my friend for forgetting to do something. We played quite a few games, all of them were equally hilarious, we keep saying we should do it again, we’ll see…

Because Christmas is best spent with family, and I wasn’t home for Christmas, and neither was my friend, we grabbed an early bus and went to Bethlehem and Jerusalem to celebrate Christmas. This picture was taken in Bethlehem in the Church of Nativity on Christmas Eve. Bethlehem goes all out for Christmas (which in US terms is equal to half-assing Christmas). There were lights hung from buildings, a nativity scene outside the Church and a giant christmas tree and they have concerts everyday beginning December 1. The church itself was decorated with wreaths (as you can see below) and it was perfect for getting a Christmas spirit-fix.

On Christmas Day we were back in Jerusalem, which doesn’t celebrate Christmas (except for some decorations in the Christian quarter) luckily we found a small hotel to have lunch in and they were decorated for Christmas. They played Christmas carols in Arabic* as we ate and afterwards we took a nice picture in front of their Christmas tree before setting off to Tel Aviv to visit my friend’s friend. 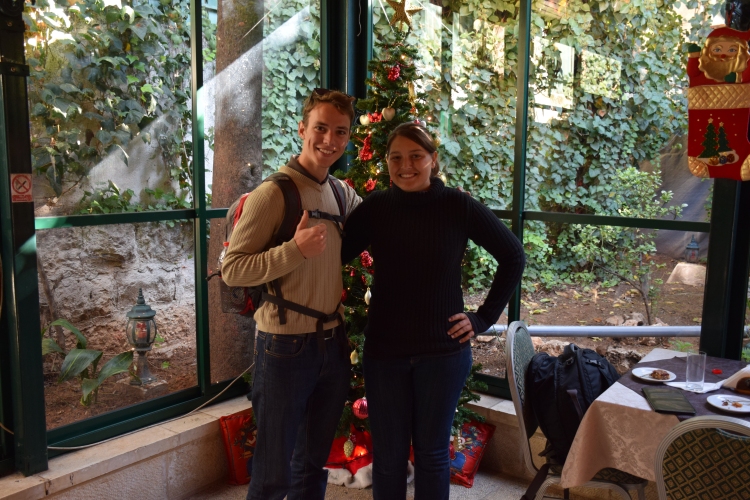 #datkibbutzlyfe: Like most of Israel, the kibbutz is full of cats. On the kibbutz there are lots of strays and there seems to be a half hearted effort to capture them, bring them to the vet and get them spayed/neutered. The ones who have visited the vet have the tips of their ears cut to mark them as safe to pet/play with. But the majority are still stray/feral cats (even after visiting the vet). The thing about these cats, though, is that they don’t particularly behave like stray cats or feral cats, but you can’t consider them adopted either. Tom, for instance, lives in the student compound, totally loves all of the students who love him and is very sweet; but he doesn’t belong to us and if you piss him off he has no problem swiping at you or biting you. So I would call him a feral cat, except we’ve totally adopted him and he’s not afraid of humans at all which are both traits that I attribute to feral cats. There is a third type of cat on the kibbutz which is the cats who have been adopted by families. This is very easy, if a family wants to adopt one of the cats running around they take it to the vet, get its shots, and get papers saying they own the cat. Voila.

In addition to all of the cats running around there are about a bajillion dogs. And by a bajillion I mean about 42. None of the dogs are strays, they all have owners and they’re all super nice. My favorite is a little dog, the size Ginny is supposed to be, with light brown fur and the sweetest attitude ever. Her name is Lama (which means Why in hebrew, but it could also be Llama like the animal), and one day when I was eating breakfast, I finished early and she sat in my lap for twenty minutes until everyone else finished. There are a few puppies on the kibbutz as well, one of them was running around with a pink sweater on a few weeks ago and it was the cutest thing ever.

The interesting thing about the dogs, and apparently this is true of most kibbutzim, is that they’re the source of most of the community disagreements. There’s lots of drama around whose dog bit whom and who lets their dogs run around versus who keeps them on a leash etc. Every kibbutz has a dog committee that deals with these disputes and takes care of dog issues. If a dog bites someone, for instance, that dog is taken up before the committee and they will decide if the dog has to now wear a muzzle and for how long. One of my favorite dogs, a beautiful brown and black dog named Mowgli, appeared with a muzzle on one day because he had bitten one of the senior members of the kibbutz. I’m still trying to learn a bit more about how the whole process works, for instance, if a dog bites me, and I file a complaint, would they still punish the dog? I mean, these are all nice dogs, it’s hard to imagine them biting people without provocation.

But the best part of having so many dogs on the kibbutz is that all of the students get to hang out with dogs and play with them and not have to worry about taking care of them or leaving them alone while we’re in class. One of my favorite events at UCI was when they’d bring the therapy dogs in because I never got to see Ginny during the semester so having dogs around all the time is kind of the best thing ever.

*The one thing you learn about Christmas songs when they’re sung in arabic is literally how few of the verses you actually have memorized. I kept trying to sing along in my head and usually, after the first line, I’d really have no idea what came next. Which was funny, because if it was being sung in English I’d have no trouble singing along. As it was, I had to keep repeating “Angels we have heard on high dum dum dum dum duuuuum dumdum.” And then that got stuck in my head.