Because Mendoza threw off my blog schedule, you all get two blogs, this week this one filled with things I did last week and this week (aka today).

The tango is a very popular dance here in Argentina (as I’m sure everyone knows) and in addition to tango shows around the city, and lots of tango classes, there are also milangas. These are essentially tango dance halls (similar to Ellington, but no lesson). People congregate, they put music on and everyone dances. The majority are in dance halls and cost ten dollars or so to attend but a few are outside and a few are free. Every Sunday after the San Telmo feria there is an outdoor milanga that is also free. I attended it with my friend who’s been taking classes and she jumped into the throng and danced with a stranger while I practiced taking photos of people dancing. It’s about ten times harder than you would think. Next time I’ll be out there dancing too!

So this one time we walked to the end of the San Telmo feria where we found a pretty epic looking zombie and monster museum/walk through. We added it to our list of to-dos later on when we had an empty Sunday. The statue outside was too perfect, NOT to take a picture with though.

Downtown, right next to the Nature Reserve there’s this great street. And I figured I should probably take a picture next to this street sign, because it’s kind of my street. But When we were walking over I expected to have to stand beneath it and try to look cool leaning against the sign post. Instead, we found this awesome raised sitting area; perfectly placed to take a photo. 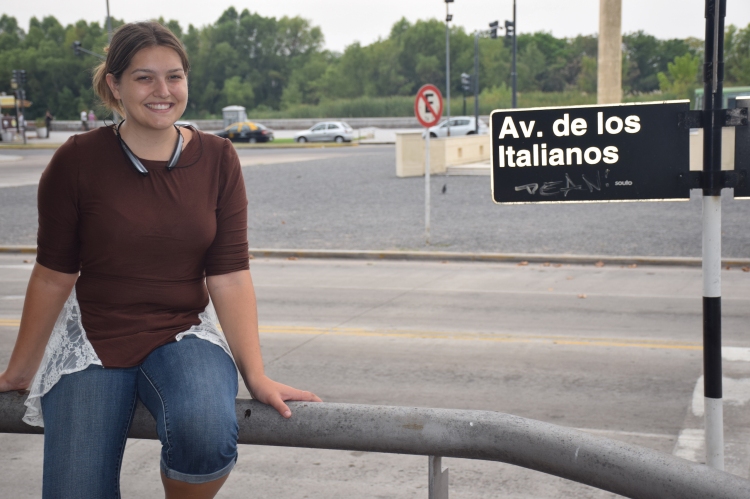 So of course, being that close to the Nature Reserve, we had to go inside. For the most part you feel totally unconnected with the city in there. The reserve is giant and one edge opens up onto the river (which opens up to the ocean) so you really feel out of the city. My friend told me that we were on the river but I didn’t believe him so I tasted the water. Definitely river water. Occasionally, while walking through the park, the bushes and trees will part and reveal the city skyline in the background. It never lasts long though.

On a different day, with a pretty cool festival, we took a break and walked to the congress building because we hadn’t done it yet. The sun was setting behind the building so I didn’t get a full picture – as my friends here are used to hearing – the lighting was no good. But this sweet snapshot gives a nice view of the building nonetheless.

Ah so that cool festival I mentioned was a food and cultural festival for the cultural organizations within Buenos Aires. All of the different cultural organizations set up booths and sold food and taught folks how to cook said food at nearby cooking stations. At the end of it there was a pageant and parade where a young woman was crowned as “Queen of the Communities.” As part of the parade each community had a float showing off their contestant and other folks dancing or dressed in traditional wear. This lady was having a lovely time spinning without dropping the pot, I believe she was part of the Colombia float. 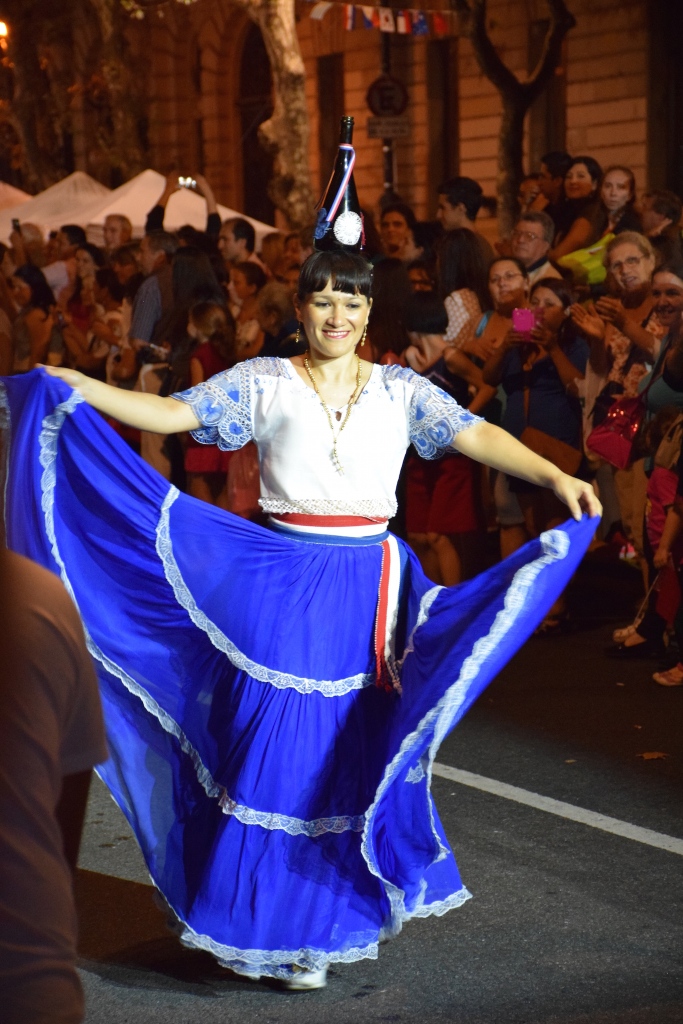 A few floats had little girls like these two looking absolutely adorable and not 100% sure what’s going on.

Friday was out fun day! Shortly after our fun horseback riding adventure in Mendoza, we returned to Buenos Aires to do it all over again with API just north of the city. We left bright and early in the morning to take a bus an hour north of the city into the pampas to visit and estancia and meet some gauchos. And an adorable puppy, this tiny little ball of cuteness attracted the attention of every single one of us and led to a frenzy of picture taking.

We had a couple of minutes to relax before heading onto the horses. I played soccer with some of the students while these guys told each other hilarious jokes on the benches. They also fed us delicious empanadas which I haven’t had for over a week so I was seriously missing them. 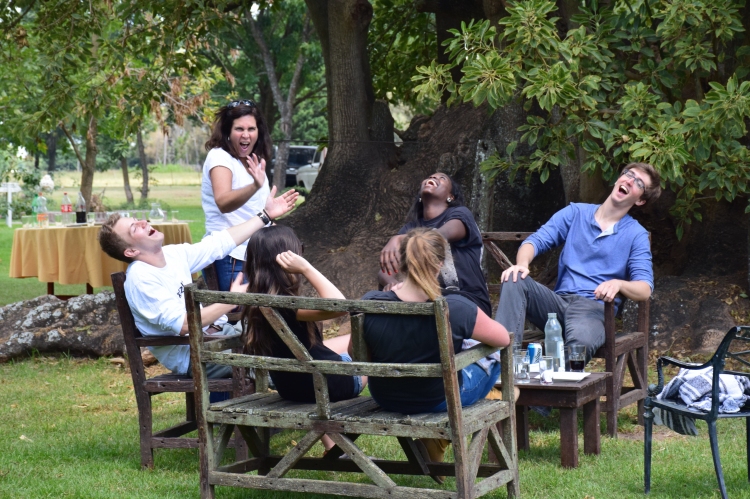 It was a beautiful and perfect day on the pampas. These horses were just as well trained as the ones in Mendoza and the guides were fine with us doing our own thing as long as we were stayed near the pack. This was great for me and I spent the ride trotting to the front line and then stop my horse and turning him around and waiting to take pictures of everyone on their horses. While my horse wasn’t necessarily always pleased to meander to the back of the line, we both had a blast trotting back to the front and pausing to snap photos along the way.

At one point, one of the other students borrowed my camera and took kindly took a few photos of me as well! I love when that happens! 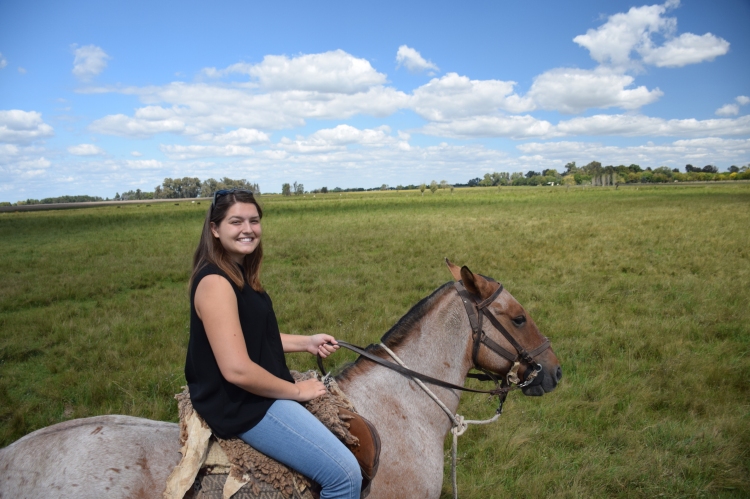 After the asado and the horseback ride the lady who was running the estancia (I think) introduced this guy. He actually went on the ride with our group so we were sort of familiar with him, he’d tip his hat at me when I’d trotted past at some point. She, however, introduced him as one of the original gauchos in the area. He played five or six songs on his guitar, singing in a rough voice in Spanish. I was able to understand some of the lyrics but not enough to totally pick out the meanings.

After that they brought out a horse-whisperer (in the old fashioned sense of the word) to show us how the native tribes used to bond with the horses rather than breaking them. His horse was incredibly trusting and, after he had it lie down on its side, he lay on top of his horse. Afterwards, we were all able to say hello to the horse ourselves. While I could show you a picture of the gaucho lying on top of his horse, I figured a picture of the horse nibbling my fingers would convey the same meaning and be slightly more amusing.

We had some down time between lunch and tea and the estancia had lots of fun things for us to hang out and do. Having already played soccer and frisbee, we headed out to the edge of the area where a freezing infinity pool and a beautiful view waited for us. I jumped in, froze, and climbed out to warm up in the sun.

#datcitylyfe: The pampas are the are surrounding Buenos Aires and they’re beautiful flatlands. There were no tall buildings or mountains so the sky seemed twice as big. While flying into the country we flew in over the pampas and I was confused because I had no idea where the city actually was (mostly because we were flying south, the city was further south, and I was looking west). Pretty much all I could see were green fields forever. The pampas surround Buenos Aires and go as far north as the southern part of Brazil and are filled with estancias. Gauchos work on the estancias as cattle herders and are known pretty well around the world. The gauchos we’ve met all wear this awesome hat (not at all like a cowboy hat) and I’ve really been itching to get my hands on one.

#datcitylyfe: Obviously, when you switch hemispheres, the wildlife changes immensely. The estancia had a ton of really large stilts, pigeons and parakeets. The parakeets were singing so loudly that they were competing with the gaucho’s music. While I was out walking and taking some photos I found this rather cool feather from one of the local birds. Dad, if you’re bored, you can see if you can figure out what bird it came from. 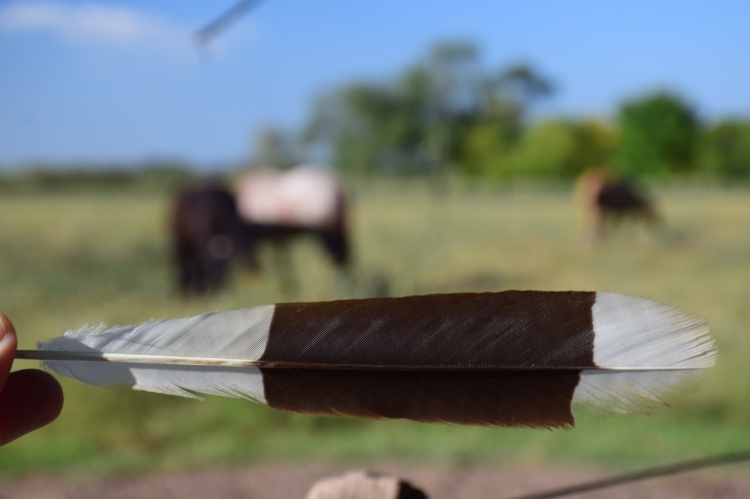