As is wont to happen when you spend enough time in one place, I finally have my own favorite places to hang out, cafes to get lunch at, and routes to take to school. My favorite cafe to have lunch at, is a little French cafe right next to school called Mon Ame (pronounced similarly to Mon Ami) with superb food, excellent music, free wifi and quotes on the wall that change every few days. Most of the quotes are excellent and don’t translate well to English, probably because my translation skills are behind my comprehension. I tend to spend lunch here twice a week, snacking on the world’s best medialunas (miniature croissants painted with butter) and drinking strawberry lemonade while doing my Spanish homework.

As I promised, here’s where I’ll tell you more about the great outdoor exercise areas in Buenos Aires. Buenos Aires likes having healthy citizens, to assist the citizens in this endeavor they provide them with all of these great “Health Stations” (estación saludables) where you can check your weight, get your blood pressure tested and obtain a short list of other useful pieces of information. In addition to these, they have outdoor exercise areas located all over the city, with different types of exercise pieces. That’s why last week I was so excited about the treadmill! We’ve seen these exercise areas all over the country but that was the first treadmill. This exercise place is probably my favorite, but for the treadmill, it has all of my favorite equipment; and it has this great view of the Puente de la Mujer (Woman’s Bridge, see a picture of me in front of it in my first-ish blog). 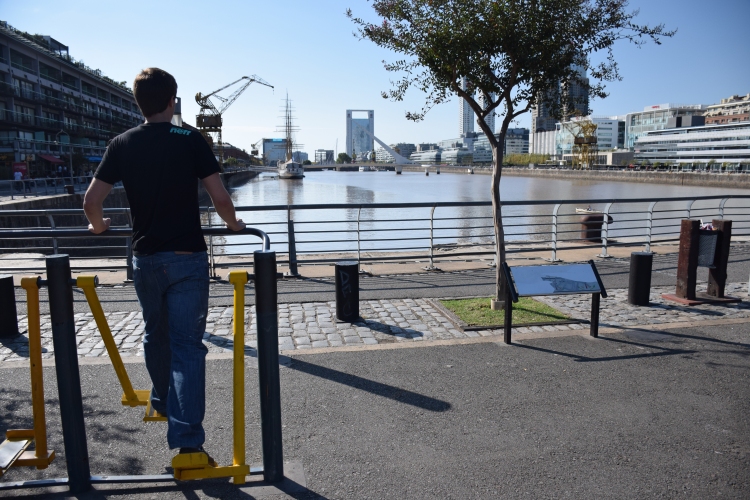 The other great thing about these exercise places is that they are absolutely hilarious. Not only to use the equipment, but to watch other people using the equipment. It took a few tries to get this pictures because this one is so ridiculous that we always laugh when using it, but one day, we saw this woman, one hundred percent straight faced, use this thing for about twenty minutes. My friend and I agreed that she was obviously doing something wrong. This thing essentially simulates walking and after spending five minutes on it, I usually only feel a nice stretch in my hamstrings but not too much of a workout. My abs usually get a great work out on this machine however, because I’m always laughing when I use it. I don’t actually know how the lady was doing this straight faced. 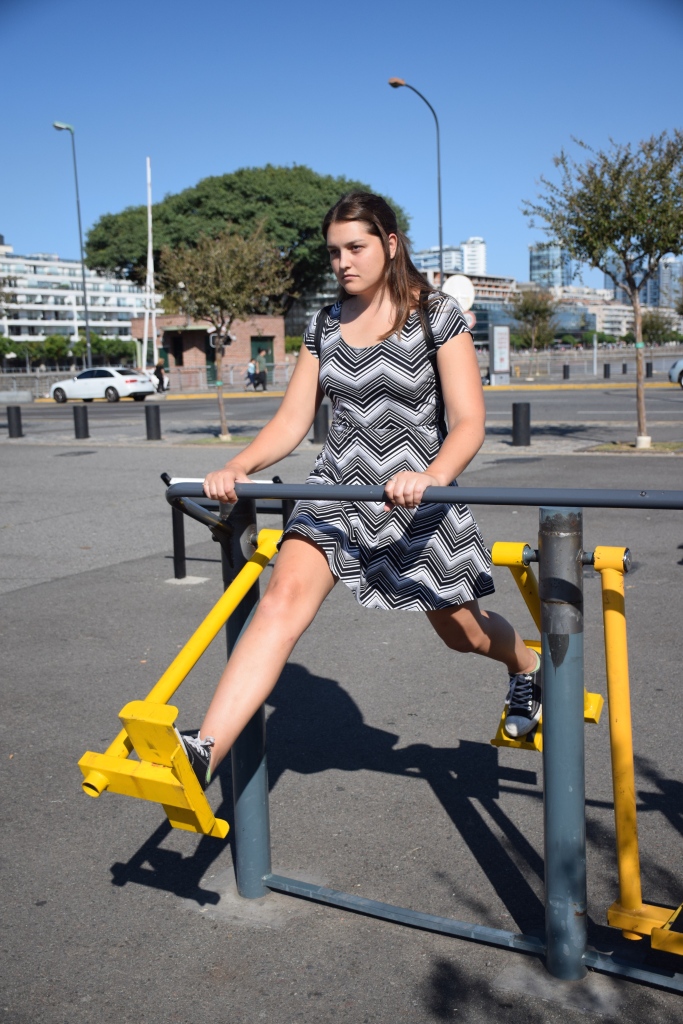 As I’ve talked about dogs in the other cities I’ve visited, I might as well discuss the dogs in Buenos Aires. There’re dogs everywhere in Buenos Aires, unlike other cities, however, we don’t have too many strays. I’m not sure I’ve ever seen a stray here. They pretty much all have owners. However, everyone here lives in an apartment so those who own small dogs are flying high. Those who don’t (which seems too be a large percentage) find different ways to exercise their dogs. The parks all seem to have areas sectioned off as dog parks where you can see all different types of dogs playing during the day and some owners will just let their dogs off leash within the park. The dogs here are excellent at not running into the street. But, for owners who don’t have the time to bring their golden retrievers to the park every day, you can also hire dog walkers. And these aren’t the high school dog walkers who are doing it for some extra money, these guys mean serious business. I finally remembered to take a picture of one to show you guys and that’s below. Most of the dog walkers have at least this many dogs, and they’re excellent guard dogs. I walked past one and got too close once, and all the dogs barked at me (except for the cocker spaniel, it looked too tired to bark). The thing I always find most impressive about these guys is that the dogs are so well behaved, they all walk in formation, they sit down in formation when the dog walker stops and they never get themselves tangled! Kudos to the dog walkers, those unsung heroes of the city. [I don’t know what the guy in the cover photo is doing, I found him in the park, where I presume he brought the dogs to play. Then he loaded them all back onto the bike and left. There’s four dogs in the back and two in the basket on the front.]

My friend and I finally made our way to the Humor Museum, with the assumption that for the most part we wouldn’t understand the comics. That was somewhat true, but less true than we expected. The comics we did understand tended to be incredibly funny so I assume the rest were too. The museum consisted of an upstairs with a popular comic figure from the past  getting two rooms devoted to him and a small section devoted to the remembrance of the “Je Suis Charlie” hashtag. That floor was mainly devoted to kids activities and had a few interactive exhibits. The bottom floor had the actual history of comics with past political comics and a room that had early television comics. For the most part, these didn’t have words so we enjoyed the air conditioned mini cinema and laughed as the characters tricked each other onscreen. This gem was one of the many comics I found in the museum.

Just like most big cities with large immigrant populations from the Asian continent, Buenos Aires also has its own somewhat misnamed China Town. Of course, part of this misnomer has to do with the fact that the first folks who moved here were from China and also that in Spanish, the porteños refer to anyone from Eastern Asia as “chino.”  In comparison with the China Town in San Francisco, this is place is tiny with one main street and a couple stores misplaced on the nearby streets. However, the goods are similar though some have a Argentinian spin on them and include the lucky owl from Argentina and the food is just as excellent. We had dinner at a nearby restaurant and it was good enough that I really want to go back.

I also thought the dragons have the same expression Ginny occasionally gets on her face when you rub her belly, which made me laugh a little bit.

Other parts of the city don’t have nearly as interesting statues. This guy is located in Puerto Madera, near Costanera del Sur, where there’s a line of choripan trucks waiting to serve you. I seem to end up there far more often than I expected and the cheap choripan makes for an excellent lunch. Its sweet location by the nature reserve means you can eat with a nice view. I don’t remember who this statue was and I forgot to take a picture of the plaque, but I tried to mimic him, I think I look a little happier than he does though.

*To any of my Spanish-speaking homies, feel free to correct that translation.

#datcitylyfe: So learning a second language is hard. Going and immersing yourself in a different culture to try and learn that language helps immensely and it often provides with GREAT mistranslation stories. I’ve so far managed to avoid telling anyone I’m pregnant instead of saying I’m embarrassed, shout out to my Spanish teacher who taught us not to do that one, but I’ve made my own blunders which are equally comical to me. Some of them are only comical to me, such as tonight, when the ball was going out of bounds during the volleyball game I yelled, “Ayy!!” which is exactly what happens if you yell “Out” and “Afuera” at the same time. Other times however, are far more comical because they involve some level of embarrassment on my part and that is the reason I’ve taken so long to share them. One example would be when an unfortunate mix up over text involving my Spanish and the poor timing of the text messages caused me to tell a guy that I was nervous about going on a date with him rather than saying I was excited to go to Bariloche the following weekend (I didn’t even want to go on a date with him so you can imagine trying to correct that mishap was very awkward).  C’est la vie, eh?

One day, after dinner when we were all chatting, as is customary in Argentina (it’s actually a custom called sobremesa). My host mom goes, “Ah, Marcelo (her boyfriend) didn’t call me” I looked away at this point because lots of conversations were happening so the next thing I hear her say is “Oh! Murió!” Which means she/he/it died. And since I wasn’t looking at her, my first thought was that her boyfriend had died. So my jaw dropped and then I looked to her, about to give her condolences, like truly worried (everyone else was still laughing and talking) and then I noticed she was looking at her cell phone. Her cell phone had died, not her boyfriend. One of the guys at the table had noticed my expressions and we both cracked up over the misunderstanding.

Then there’s another great story about a really important word in Argentina: Dale (pronounced: Dah-lay). It means all sorts of things: okay, give it to me, tell me, sure, let’s go. Whatever you want it to mean really. But I didn’t learn about dale until I’d been there for awhile, certainly not before my first volleyball practice. So I go to the practice and I’m working on learning everyone’s names a couple were pretty easy, and the setter I was sure I had. Everyone kept calling her Dolly. During a game they’d call “Dolly!” when they wanted to hit, so how could the setter name not be “Dolly”? Fast forward a few weeks and I realized that the setter’s name is not Dolly, I have no idea what the setters name is, and no they weren’t saying “Dolly,” they were saying “Dale.”

In addition to trying to understand the Argentinian accent and adopt it as my own, the Argentinians occasionally have to work to understand my accent. Usually this occurs when I start speaking too fast: first my accent gets thicker, then I start losing my verb tenses, and then who knows what I could be saying to people. However, for the most part, it’s been easy to converse with people. Fast forward to the group project I did last week in China Town. Our job was to talk to a shop keeper about their experiences in China Town and why they’d moved there, the culture of China Town, etc. We had the vocabulary for this so we headed inside a shop and told the shop keeper that we were students and that we wanted to ask him some questions for a project. After repeating ourselves twice, he waved over his assistant and motioned for us to talk to her. So we repeated ourselves once again, “Somos estudiantes, tenemos un proyecto para nuestra clase sobre barrio chino, tenemos unas preguntas.” And she turns to him and says, “Son estudiantes, tienen un proyecto para sus clases sobre barrio chino, tienen preguntas.” And so it continued through the whole interview as we asked our questions in Spanish, and she repeated them, in Spanish.